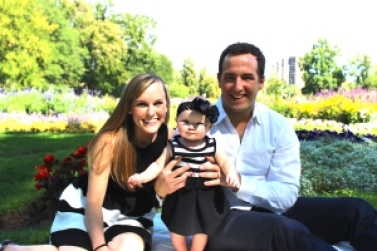 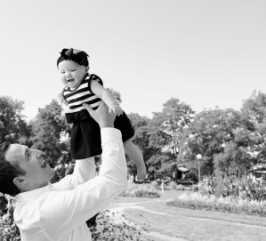 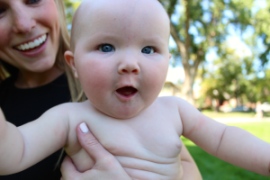 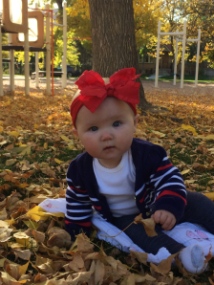 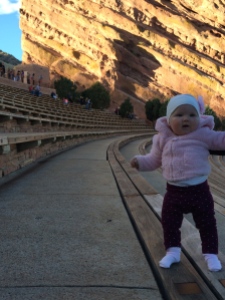 Wow! Where has the time gone. Our sweet girl is eight months old today. I can’t believe it. Before we know it, she will be a year old! Let me rewind a bit. For the past few months, we were having some big problems with Ella Roses’ sleeping habits, unfortunately she was never a very good sleeper and Brendan and I were really struggling. We kept getting sick because we were not sleeping! It’s funny because people kept asking me if maybe she regressed, but unfortunately, she was just never a great sleeper and was getting up every three-four hours, two sometimes three times a night. So this began to wear on us, and we decided, after seven months, we needed help and hired a sleep coach. We really liked the sleep coach’s method of “coming and going” and teaching Ella Rose to fall asleep on her own. She now sleeps in a sleep sack with a lovey and her pacis in the crib, no more Baby Merlin’s Magic sleep suit! We did love the sleep suit (Baby Merlin’s Magic Sleep Suit), and got some good nights out of it, but it was time for her to move on and not be so dependent on it. She loves sleeping on her side. It only took two hard nights at the beginning, but now she is sleeping 10-12 hour stretches. The key was putting her to bed early (6pm) and having two set naps a day (one in the am about an hour after she gets up and then one after lunch). It’s unbelievable too, because now we can lay her down awake in her crib, and she will just rolls to her side and goes right to sleep. Man, we’ve come a long way! The sleep coach was well-worth it! Another book I found to be super helpful is, Healthy Sleep Habits, Happy Child. I like this book, because you can flip directly to the age your child is, and only read that portion vs. stressing about reading an entire book on no sleep 🙂 . Now, I am finally feeling like myself again. I have healed, and I’m getting some much needed rest. It’s nice too, because Brendan sees her and plays with her, while getting ready for work each morning, and she’s always in a great mood with him.

October was a very fun month for us (seven months for Ella Rose). It started with us celebrating our birthdays up in Breckenridge for a weekend. We drove up early on Saturday morning, had breakfast, walked around the town, drove up the mountains, walked around a bit and took pictures, took a nap, went to dinner, and bed. Sadly, Ella Rose did not sleep well that night because she was scared of sleeping in a new place. Therefore, we left early the next morning and headed back to Denver. But, we did love Breckenridge. What a neat little town, I told my mom, she’d love it! It was like a Cape May in the mountains. So cute. I also gave Brendan his surprise trip to Napa with his best college buddies for his 30th birthday. We will go Memorial Day weekend 2015. I gave him a bottle of wine called “NAPA” and wrote him a poem. He was so surprised and cannot wait for the trip. I was shocked I was able to keep it from him for that long. The following weekend after Breckenridge, we went out to dinner for our birthdays, and then Andrea, Matt, and Joshua came to visit. What a great weekend. It’s times like those that I really miss my family and wish we lived closer. I feel like Andrea and I have grown so close while going through pregnancy and motherhood together. We had a great time with them. We went to a Mexican restaurant the day they arrived. Then we drove up to Boulder and hiked, walked around our neighborhood,, and just spent quality time together. It was nice to be able to snuggle with Joshua and so neat watching Ella Rose and him interact. She really loves her cousin and would squeal and talk to him, so cute. After they came to visit, Rachel, Nick (Brendan’s good friend from college), and their sweet little girl, Elle, stopped in for a visit Halloween weekend. That was also nice. It was pretty low key and we just hung out with the babies which was a lot of fun. In a few weekends, my parents are coming into town…which will be great to see them since it’s been a little while!  Brendan’s parents are also coming the first weekend of December. They can’t wait to see Ella Rose, and I’m so happy they’re coming at a time when she is growing and changing so much. 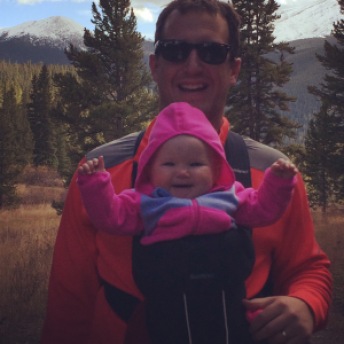 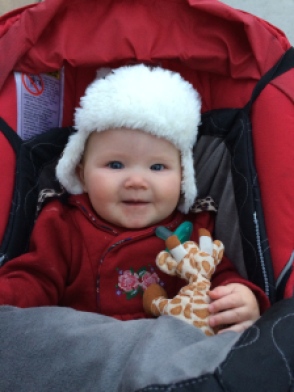 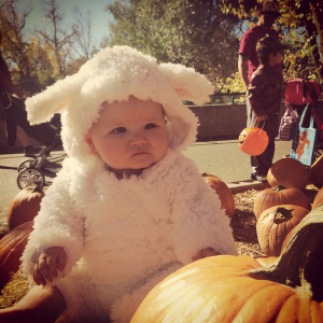 Speaking of that….wow, Ella Rose is really changing! She loves most foods that she tries. Recently she has tried turkey, ham, eggs, and cheese and loves them all. She has also mastered eating puffs. We are always trying new foods with her. Her favorites seem to be carrots, pears, puffs, turkey, ham, and string cheese. Her absolute favorite thing to do in the morning is eat Cinnamon Raisin bread with Mommy. She’s such a big girl. It’s neat because she really likes and enjoys the foods we eat. I am really excited that she likes to eat now (since it took a good 4 weeks for her to like solids). She is also slowing down on the nursing and only nurses when she wakes up in the morning and sometimes at night before bed. I am kind of sad that she may be weaning already.

After she learned to sit up at five and half/six months, one of her favorite toys was her exersaucer. Now, at eight months her favorite toy is her baby doll that her cousins gave her and named Isabelle, she gets so excited whens she sees her “baby.” She rocks it and pats the baby’s back; which is so neat to see her be so nuturing, so young. Another toy she enjoys is the Melissa and Doug wooden play station. With this toy, she learned to pull herself up this week. She also learned how to go from sitting to her hands and knees and scoots around. I know she will be crawling any day now. Or maybe not, she’s now eight and 1/2 months old and can take steps on her own with her push walker! Furthermore, she has also mastered waving and clapping. She looooves waving at people. Just the other day, we went to “Rosenburg’s” for the best NY bagels, and while we were sitting outside, she waved at everyone who walked by. We also went to tour a school, and she waved at every kid in the kindergarten line that walked by. It was so funny! She is such a social butterfly, takes after her mama I guess. 🙂 Whenever we go to her baby events she is always screeching and talking to the other babies. She loves being with them and lunges forward to touch them when she sees a baby friend. One of her favorite activities lately, is going to MYgym. We switched from gymboree to this to try something new. We really love it, but it’s a distance from our home, so I’m not sure how long we will keep it up for. She absolutely loves going and loves seeing the other babies there during circle/warm ups and story time. She has done a somersault, rides on the zip line, hangs from the bar, and bounces. Ella Rose also loves going to the park, each afternoon we walk over to the park, and swing on the swings and go down the slides. She is obsessed with going down the tunnel slide with me and squeals before we go down and count to three. Ella Rose also loves bath time and brushing her teeth with her tooth brush. She is still a huge fan of Taylor Swift. 🙂 Some of my favorite things about her is her pudge on her hands and feet, snuggling and reading after naps, her belly laughs/squeals, and the way she looks up at me.  It is just the best. We have such a special bond, and I’m so lucky to spend each day with her; I wouldn’t change a thing.